Not long after a friend of mine started dating her Romanian boyfriend, she introduced me to savarina, which he had introduced to her.  Savarina is a Romanian dessert that looks like an upside-down cupcake that’s been soaked in a sweetened rum syrup and then slit open and filled with tonnes of whipped cream.  The surprising thing was that we didn’t even have to venture far to get this irresistible dessert.  It was sold at a Romanian bakery/cafe (where I also later discovered Kürtőskalács, or Chimney cake!) close to the heart of downtown!  It had opened a year earlier, and I remembered seeing it on occasions when I was in the area.  But it had never occurred to me to go in.  Obviously I didn’t know enough about Romanian desserts to get excited!  Once I’d tasted savarina, though, I kept wanting to go back.

Soon I became obsessed with learning how to make savarina.  I found recipes online, mostly in Romanian, but even if I had used Google Translate, I wouldn’t have known which ones were truly good.  Some called for yeast, others, breadcrumbs…so which was it?!  I did try one recipe a few years ago, posted by a Romanian, but it fell short of my expectations.  I asked a Romanian colleague of mine, and even got my sister to ask a Romanian friend of hers in London for the recipe.  It seemed no one really knew how to make it.  I guess in Romania, you’d just go to your local bakery and buy it!  Last summer when I was in London, we visited another of my sister’s Romanian friends, and I even made it a point to ask her mother!  She said she’d find her recipe once she was back home, but alas, I never heard anything.

Then I remembered seeing savarin and rum baba (baba au rhum) recipes in some of my mother’s old European dessert cookbooks.  They seemed similar, and I wondered what the difference was.  It turns out it’s mostly just the size and shape.  Traditionally, savarin (from which the name savarina is derived) is baked in a cake-sized ring mould, while rum babas are made in small, individually-sized cylindrical moulds about 3 inches high.  Sometimes rum babas can also include dried fruit such as raisins.  While babas are soaked in a sweetened rum syrup, savarin uses a different alcohol mixture.

It seemed that savarina was perhaps more like a rum baba, rather than a savarin.  So I searched for a rum baba recipe instead.  There were good reviews for this recipe so I figured it should be pretty decent.  It wasn’t decent, it was out of this world!!  The taste and texture were so similar to the savarina I’d had!  After that first bite, it was like, “This is it!!!”

Initially I thought the amount of water was way too much, but after making a successful first batch, I realized you really do need such a huge amount of liquid.  Having made Tres Leches Cake (another favourite alcohol syrup-soaked cake!) and from my previous savarina attempt, I found getting the syrup to completely absorb into the centre of the cake can be tricky.  Now I know the secret – you can’t just just spoon sweetened rum over the cake – you’ve got to thoroughly dunk it in the syrup!   OMG, they were soooo incredibly yummy – light and refreshing and full of amazing flavours.

You can use rum baba moulds if you want to be traditional.  But I baked mine in a muffin pan because ultimately, I was making savarina (although I decided not to  flip them upside down).

You can make them different shapes, and call them rum babas or savarina, but one thing’s for sure – you’ll fall in love with this heavenly dessert! 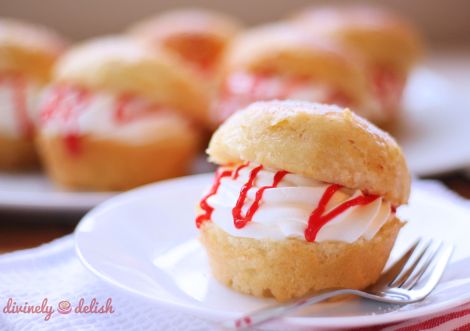 (Adapted from this recipe)

RUM BABAS (SAVARINA) (Makes 8-12 babas, depending on size of mould)

1. Lightly grease a muffin pan or rum baba moulds.  If using the latter, place them on a baking sheet.

2. Gently heat the milk to about 110F.  Remove from heat, pour into a bowl and dissolve the sugar in it.  Add the yeast to the solution, stir to dissolve.  Cover and set aside for about 10 minutes.  The mixture should be foamy.  (If using fresh yeast, just dissolve it in the warm milk).

3. In a stand mixer, add in the flour, sugar (if not already added in Step 1) and salt.  Mix a few seconds until thoroughly combined.

4. Add the eggs and the yeast mixture.  Mix at low speed.

5. Using a flat beater or a dough hook, mix at high speed until the dough has more body and comes away from the sides of the bowl. This should take about 10 minutes.

6. Add the butter.  Continue kneading the dough until all the butter has been incorporated.  Scrape the dough from the sides of the bowl using a pastry scraper.

7. Cover the bowl with a clean tea towel and let the dough rise until doubled in volume.

8. When the dough has risen, knock it back with your hand.

11. Bake for 15-20 minutes, until the cakes are puffed up and golden.  Remove from the pan/moulds, and transfer to a cooling rack.  Let cool.

12. To prepare the syrup, pour the water into a medium-sized pot.  Add the sugar and bring to a boil.

13. Lower the heat and add star anise, strips of orange peel, vanilla pod and cinnamon stick. Bring to a boil again and infuse on a gentle boil for about 15 minutes.

14. Remove from heat and add the rum.

15. Steep the cakes in the hot syrup. They should be thoroughly soaked. Flip them over and soak the other side.  Remove from the syrup and pour a dash of dark rum over the cakes (optional).  Let cool.

16. In a large bowl, make the chantilly cream by gradually adding sugar to the whipping cream and beat until stiff peaks form.

17. If using a muffin pan, turn the cakes upside down, and slice the cake horizontally about 1 cm from the top (don’t cut all the way through – you just want to make a “lid”). Open it up and pipe a generous amount of cream.  (If using baba moulds, just pipe the cream on top.)

Tip: You can make the cakes the day before, soak them in syrup, and place in the fridge overnight.  When ready to be served, just pipe in the cream.  This way, you can enjoy the savarina nice and cold 🙂

Ipoh Kai Si Hor Fun (rice noodles in soup) seems like a simple dish. But the secret to making it really delicious lies in taking the time to make the broth from scratch.😋
Oven-baked sambal fish. This may not be the prettiest dish, but it sure is tasty!😍
These are the best soft and chewy cookies! Added hazelnuts and cranberries, because that's what I had. Made with chickpea flour too, but you wouldn't even know!
When you have a pomelo that no one wants to eat...make a pomelo salad! This is so good that I made it twice in 3 days. I think it's my new favourite salad!
Japanese Milk Bread (shokupan). The lightest, fluffiest and most pillowy soft bread.🤤 Gotta love bread that stays moist and fresh for days!🍞🧈
Dragon fruit, custard and cream😋 The best way to use up leftover vanilla custard is to make fruit custard cups. It's a simple (and pretty!) dessert and sooo yummy.
What do you like to eat with curry? I had some whole wheat flour that needed to be used up, so I made whole wheat naan to go with leftover vegetable curry. Yum😋
Everyone is making mooncakes so I figured I should make some too.😂 Tbh I'm not actually a huge mooncake fan, but if I had to choose, I prefer snowskin mooncakes, which have a soft and chewy mochi-like skin. These here are filled with a yummy pineapple custard. Happy Mid-Autumn Festival!🎉
Happy Malaysia Day! 🇲🇾 Here's a Malaysian-inspired Sirap Bandung Tres Leches cake, which combines two of my favourite things, tres leches cake and rose milk. So good!🌹😋
Isn't freshly baked bread just like the best thing?! These braided raisin loaves are pillowy soft and richly flavored with just a hint of sweetness.
These meat patties are so tender, juicy and super delicious! I enjoyed this simple home-cooked dish as a kid, and I still like it just as much!
Prawn curry😋 Aromatic, packed with spicy flavours and incredibly yummy!