Tres Leches is a Mexican cake, and since it’s Cinco de Mayo today, I wanted to post about one of my all-time favourite desserts!  Tres Leches means “three milks” in Spanish, so you can probably guess there’s no shortage of milk here! The cake is baked, soaked in a concoction of three kinds of milk (evaporated milk, sweetened condensed milk and regular milk) and topped with whipped cream.  How tasty is that?! And just in case you’re wondering, no, it’s not soggy!  It’s airy, fluffy and ultra moist, with just the right amount of sweetness. 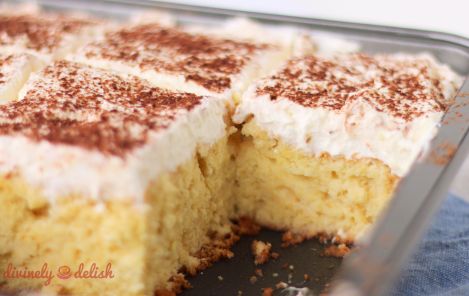 I fell in love with Tres Leches Cake the first time I had it. Before then, I don’t think I’d ever even heard of this cake. It was 2 years ago, and I had gathered with a few friends at The Mexican Antojitos y Cantina to watch the final of the UEFA Champions League. I’d been here before, and as usual, on such an important match day, it was packed with mostly Spanish-speaking Barcelona supporters.  The food here is fantastic.  We always enjoy nice brunches of eggs with beans and chorizo, or tortilla chips with guacamole, while watching the games. This time though, we noticed that many of the loudly cheering Barça fans around us were also eating these scrumptious-looking whipped cream-topped slices of cake (probably not what comes to mind when you think of football fanatics)!

Obviously, they knew something that we didn’t!  Curious, we asked our server about this popular cake and ordered a slice too. Oh my goodness, it was love at first bite!    .

You can imagine when I got home, I scoured the internet for a good, authentic recipe! I became obsessed with recreating this wondrously yummy cake. Unfortunately, my first attempt wasn’t very successful, and then I tried again and failed. The issue both times was that despite using a fork to poke lots of holes all over the cake, most of the cake didn’t absorb the three-milk mixture. I couldn’t figure out what I was doing wrong. It crossed my mind that maybe I should let the whole cake sit overnight in a huge bucket of milk! Because, really, without the moistness from the milk, it’s really just a boring, dry sponge cake.

I was all ready and excited to try making it a third time for a pool party potluck that I’d organized. Unfortunately, the weather didn’t cooperate and the pool party was cancelled.  I moved on to cooking and baking other things and sadly, kind of put off trying to perfect this cake.

Then a few weeks ago, I came across this post on my Facebook news feed that someone had shared.  I saw the pictures of the lusciously moist cake and was instantly convinced that this had to be a good recipe.  Third time lucky?  It was time to try again and see.  It was only then that I realized that it had been two summers ago that I’d last attempted this cake!

Although I let the cake soak in the milk overnight, the liquid didn’t completely absorb into the very centre of the cake.  So there’s room for improvement (I think the next time I make this – which I can assure you will be very soon – I’m going to try poking holes on the bottom of the cake too, and using a flavour injector.  I’ve got to get this right!). But overall, it turned out great.  The outside edge slices were nice and milky. Since I didn’t have rum, I used Black Cherry Bourbon.  Let me tell you, the taste of this sinfully delicious combination of milky sweetness and subtle fruity bourbon flavour was beyond amazing! Seriously, the best cake. Ever.

2) Separate the eggs, placing the egg whites in a bowl for later. In another bowl, add the egg yolks, the 1/3 cup of sugar, vanilla extract and beat with a mixer on high speed until the mixture is thick and pale. Should take about 2 minutes.

4) Beat the egg whites with a mixer on high speed until slightly foamy. Add cream of tartar. Continue beating until stiff peaks form.

5) Add the 1-1/2 tbsp sugar and continue beating for another minute until sugar is well incorporated. Gently fold the egg whites into the cake batter.

6) Pour the batter into the prepared baking pan. Bake for 20 minutes or until a toothpick inserted into the centre of the cake comes out clean. Cool the cake for 10 minutes.

8) Pierce the entire cake with a fork. Slowly pour the milk mixture evenly over the entire cake. Cover the pan with plastic wrap and refrigerate for at least 3 hours to overnight.

9) Beat the whipping cream, slowly adding in the 25 grams of sugar, and beat until soft peaks form.

10) Top the cake with whipped cream. Dust with cocoa powder (optional) and serve with berries (optional).

Note: Leftover cake can be refrigerated for 5 to 7 days

One response to “Tres Leches Cake”

Ipoh Kai Si Hor Fun (rice noodles in soup) seems like a simple dish. But the secret to making it really delicious lies in taking the time to make the broth from scratch.😋
Oven-baked sambal fish. This may not be the prettiest dish, but it sure is tasty!😍
These are the best soft and chewy cookies! Added hazelnuts and cranberries, because that's what I had. Made with chickpea flour too, but you wouldn't even know!
When you have a pomelo that no one wants to eat...make a pomelo salad! This is so good that I made it twice in 3 days. I think it's my new favourite salad!
Japanese Milk Bread (shokupan). The lightest, fluffiest and most pillowy soft bread.🤤 Gotta love bread that stays moist and fresh for days!🍞🧈
Dragon fruit, custard and cream😋 The best way to use up leftover vanilla custard is to make fruit custard cups. It's a simple (and pretty!) dessert and sooo yummy.
What do you like to eat with curry? I had some whole wheat flour that needed to be used up, so I made whole wheat naan to go with leftover vegetable curry. Yum😋
Everyone is making mooncakes so I figured I should make some too.😂 Tbh I'm not actually a huge mooncake fan, but if I had to choose, I prefer snowskin mooncakes, which have a soft and chewy mochi-like skin. These here are filled with a yummy pineapple custard. Happy Mid-Autumn Festival!🎉
Happy Malaysia Day! 🇲🇾 Here's a Malaysian-inspired Sirap Bandung Tres Leches cake, which combines two of my favourite things, tres leches cake and rose milk. So good!🌹😋
Isn't freshly baked bread just like the best thing?! These braided raisin loaves are pillowy soft and richly flavored with just a hint of sweetness.
These meat patties are so tender, juicy and super delicious! I enjoyed this simple home-cooked dish as a kid, and I still like it just as much!
Prawn curry😋 Aromatic, packed with spicy flavours and incredibly yummy!