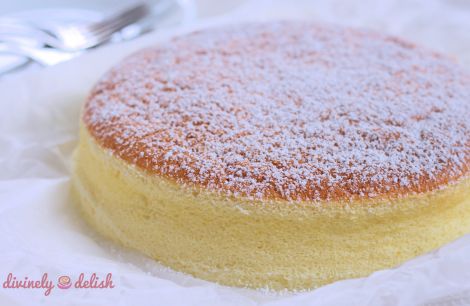 I can’t say I’m a huge fan of New York-style cheesecake.  That’s not to say I dislike it, but it definitely doesn’t rank up there with my favourite cakes.  I know many people would go crazy for a rich, dense and firm cheesecake, but not me.  It’s never been my first choice when it comes to desserts, and I would most certainly never go out and buy one. 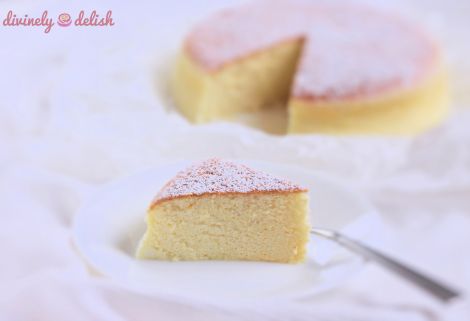 Japanese Cheesecake, on the other hand, is something else!  It’s light and fluffy, sort of like a cross between a cheesecake and a cottony soft chiffon cake.  It’s less sweet, and the addition of beaten egg whites makes it airy, with an almost melt-in-your-mouth texture, much like souffle.  In fact, while we call it Japanese Cheesecake, in Japan it’s known as a souffle cheesecake. 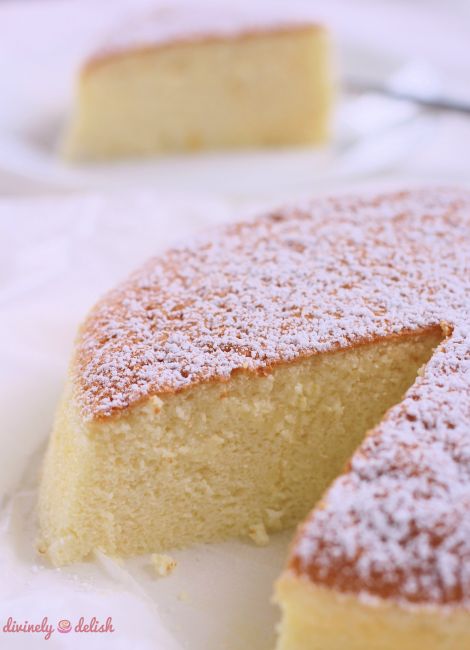 Unlike a NY-style cheesecake, which is usually topped with some kind of fruity sauce like a compote or coulis, Japanese cheesecake is meant to be eaten as is.  Seriously, it’s so tasty on its own it doesn’t need anything else.  The lemon zest lends a subtle citrus note, but if you don’t have that, orange zest is really nice too!  If you want to dress up the cake a little, a light dusting of icing sugar always does the trick.

So if you’re looking to make a different kind of cheesecake, or maybe you prefer something lighter, do give this Japanese Cheesecake recipe a try and let me know how it turns out!

While we’re on the topic of cheesecakes, I should mention that I recently tried San Sebastian (burnt/Basque) cheesecake for the first time!  It was AMAAAZING!!  I won’t go on about it now, but stay tuned! 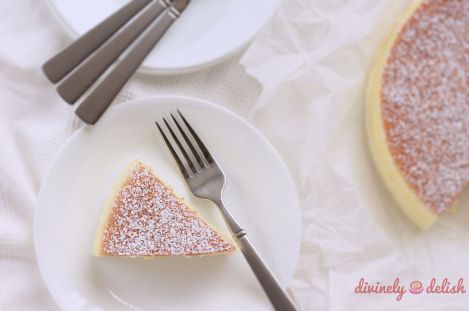 1. Line the bottom of an 8″ springform pan with a circle of parchment paper. Wrap a large piece of aluminum foil paper around the bottom of the pan (it should cover about halfway up the sides of the pan). Make sure you also have ready a baking sheet with sides that are at least 1″ high.

3. Sift cake flour and cornstarch together and set aside.

4. Pour milk into a medium heat-proof bowl. Set over a pot of simmering water. Heat until warm but not too hot.

5. Add in cream cheese and zest and stir with a whisk until the cheese has melted. Remove from heat. Add in butter and mix until melted. Set aside until the mixture cools down a bit (it can be lukewarm but not too hot).

7. Stir in cake flour and cornstarch. Set aside.

9. Using a rubber spatula, take approximately 1/3 of the meringue and fold it into the egg yolk/cheese mixture until incorporated.

10. Pour the egg yolk/cheese mixture into the bowl of meringue. Fold gently.

11. Pour the batter into the springform pan (do not fill pan more than 3/4 full). Smooth the top with a spatula. Tap the pan gently on the counter a few times to get rid of any air bubbles. Place pan on the baking sheet. Fill the baking sheet with boiling water before placing in the oven.

12. Bake for 45 minutes or until top of the cake is golden brown. Do not use a skewer. You can gently touch the centre of the cake to check if it’s set.

13. Remove from oven and place pan on a wire rack. When it’s cooled down a bit, run a sharp knife around the edge of the cake to loosen it from the sides of the pan. Let it cool completely, then remove the sides and place the cake in the fridge for at least 3 to 4 hours before serving.