It was almost 2 years ago that I first made cupcakes for a baby shower.  They were so well received then that when I was asked to make cupcakes for a recent baby shower, I already had a pretty good idea of what I was going to make.  I could’ve tried different cake and frosting flavours, but decided on vanilla cupcakes with strawberry buttercream again (especially since it was another pink girly theme, and I had just come across some lovely organic strawberries!).  I purchased fondant and made similar toppers too.  Why mess with a good thing, right?  The last thing you want to do is experiment, when you’re preparing for a special occasion!  The most important thing was that my friend, the expectant mother, was thrilled when she saw the cupcakes (as was her toddler son)! 😁

These cupcake toppers are actually pretty easy to make.  It just takes time and some creativity!  To make the round discs, I used a fluted edge round cutter, and then a small round piping tip to cut out the little holes all around.  I used moulds to create all the decorations like the ribbons, safety pins and storks, and then painted some with gold luster dust. 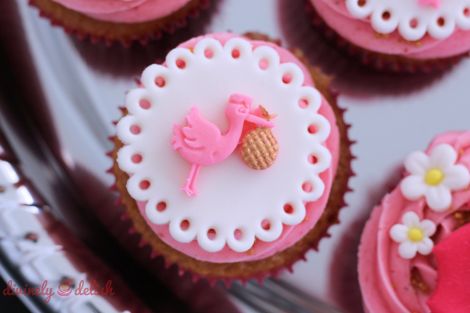 I even made cute onesie toppers with a gingerbread man cutter!  After rolling out the fondant and cutting out the gingerbread man shapes, I used a sharp knife to cut off the arms (ouch! 🤣) and the base of a piping tip to cut out the neck and leg holes.

And since I baked more cupcakes than I needed, I decorated the remaining few with just buttercream and some sprinkles and gave them to another friend.  Who doesn’t love a gift of cupcakes?!

The recipes for these cupcakes are in a previous post, but here it is again, below.  If you’re looking for more cupcake ideas, make sure you also check out my Devil’s Food and spiced pumpkin cupcakes!

1. Preheat the oven to 350°F and line a cupcake/muffin pan with cupcake liners.

3. In the bowl of an electric mixer, beat 2 eggs with the whisk attachment on medium speed (15-20 seconds).

5. Add vanilla and oil and beat on medium speed (1 minute).

7. Pour batter into a lined muffin pan. Fill liners just over 1/2 full (do not overfill). For mini cupcakes, fill the liners half full.

8. Bake for 14 -16 minutes at 350°F or until a toothpick inserted in the centre comes out clean (for mini cupcakes, bake about 10 minutes or until golden brown). Let them cool in the pan for a couple minutes, then remove.

1. Place strawberries in a blender and puree until smooth. Strain to remove the seeds, if desired. Transfer strawberry puree to a saucepan over medium heat and bring to a boil, stirring often, until the puree is reduced by at least half, about 20 minutes. Remove from heat and cool completely.

2. Beat butter with an electric mixer in a bowl until light and fluffy. Beat 1 cup icing sugar and meringue powder into the butter until just blended.

5. Add in another cup of icing sugar, and cream. Beat until just combined.

6. Beat the last 1/2 cup icing sugar into the frosting.

7. Beat frosting on high speed for at least another 5-7 minutes (the longer you beat it, the fluffier/creamier the consistency).

8. Once the vanilla cupcakes are cooled to room temperature, pipe on the frosting.

Note:  If you are making the buttercream ahead of time, keep it in an airtight container and store in the fridge.  When ready to use, simply take it out, let it come to a cool room temperature, then give it a good stir before using it.  Buttercream can be refrigerated for up to two weeks.

One response to “Baby Shower Cupcakes”

Apple cinnamon cake is super moist with a crunchy cinnamon sugar topping. It's a simple everyday cake, made with lots of apples, not too sweet and perfect to eat anytime of the day. Great with a cup of coffee!
Love baked chicken thighs? Stir-fried sticky rice? What about sticky rice stuffed chicken thighs? Omg, so delicious! The chicken is super moist and juicy with perfectly crispy skin, and the rice is so flavourful!
Dry bak kut teh is packed with flavours! Ribs and mushrooms are cooked in an herbal broth and then stir fried with more ingredients and seasonings. It's full of umami and incredibly tasty! Do you prefer the traditional soup or dry version?
Happy Lunar New Year!🍊🧧🐰Here's another snack I made, Kuih Bahulu. These mini sponge cakes (similar to madeleines) are another festive favourite! What's your absolute fave #cny snack?
Calling all bakkwa lovers! Isn't this just the best thing?! It's not Lunar New Year without bakkwa, right?🤤
Hands up if you love pineapple tarts!🙋🏻‍♀️ Yup, its time again for one of my favourite Lunar New Year snacks! These buttery, melt-in-your-mouth pastries with pineapple jam are so addictive!🍍
Have you ever tried soft Amaretti? These gluten-free Italian almond cookies are sooo good! They're slightly crispy on the outside and so amazingly soft (like marzipan!) and chewy inside.
Not your usual fish cakes...these are so much better! Spicy coconut-crusted fish cakes made with mackerel, potatoes, chillies, curry powder, cumin, turmeric and coriander. So flavourful and super delicious!
Before we say goodbye to 2022, I want to give a huge shout-out and THANK YOU to all of my followers for being a part of this journey! I am immensely grateful to each and every one of you, for your continued love and support!! I wish all of you a happy and healthy year ahead. Let's make more delicious memories in 2023! Cheers to a new year!🥂🎉
Melt-in-your-mouth shortbread cookies are always a favourite at Christmas! Wishing everyone a joyous holiday season! Happy Holidays!! 🎄☃️
The most delicious orange-scented gingerbread people! Made with honey instead of molasses, and fresh orange zest.
Flourless German Gingerbread cookies (Elisenlebkuchen) are a favourite during the holidays!